The transportation planner, designer, builder and operator for one of the country’s largest, most populous counties -- Los Angeles.

More than 1.5 million people daily rely on the LA Metro Rail and Bus System to arrive at their destination on time. The Brookings Institute has rated Los Angeles as one of the top 100 metro areas offering public transportation. The mission of LA Metro is to move riders from one location to another at minimum cost with maximumsafety , and to make quick operational decisions that improve the efficiency and safety of the transportation network. 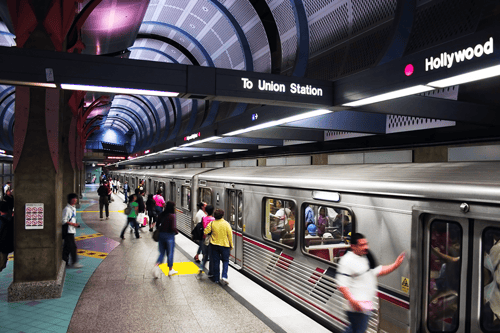 When the EOC was established in 2012, the Hiperwall solution enabled LA Metro to create a real-time transportation fusion center. LA Metro gained the ability to display both rail video feeds and bus video feeds together on a video wall at the same time. Due to the large-scale size of the video wall, the LA Metro team and law enforcement could see more visual intelligence at once, significantly improving situational awareness. Today, 215 video camera feeds are connected to the Hiperwall video wall system and the feeds can be viewed immediately with a few clicks of the mouse.

Hiperwall enables LA Metro to choose which video feeds or other visual information they want to see on the wall. The team can add, remove, resize or reposition each view of information as they choose. For example, one video feed can be enlarged and stretched across the entire video wall in seconds, or smaller arrangements of many different video feeds can be arranged in any size or position desired across the video wall, even overlapping across monitor bezels. Different arrangements of video feeds or other information can be created and saved ahead of time as an “environment,” and multiple environments can be created ahead of time and then viewed one after the other in seconds. Views of video feeds or other information can also be set as rotating slideshows. As you can see, Hiperwall provides LA Metro with vast flexibility for performing surveillance of the rail and bus lines; the technology  provides extensive visualization and situational awareness through monitoring capabilities that were never before possible for the agency.

Now that LA Metro staff and law enforcement have an enhanced view of the rail and bus lines, they are able to better analyze a situation and send the appropriate amount of officers to the scene for response or an investigation.

“Before Hiperwall, our ability to visualize an incident was limited,” said Quach. “When an incident required law enforcement, for example, it was not clear how many officers were needed. Now that we have a great deal of video intelligence, we can send out the appropriate number of officers, or even none at all. That was not true when we had our prior system and less visibility into a situation. Hiperwall helps our response be more effective and more efficient.”

While Hiperwall assists with minor incidents at LA Metro, Hiperwall’s main purpose is to stand at the ready to serve as LA Metro’s primary tool during a major incident to provide situational awareness for LA Metro staff and law enforcement. EOC operations are not fully activated unless there is a major disruption. Once a major incident has been detected visually on the video wall, LA Metro staff can monitor events on the video wall, respond as needed and also alert law enforcement and emergency response units.

Whether a minor or major incident occurs, the video wall provides video conferencing capabilities for communication between LA Metro staff located at the headquarters and law enforcement located at the mobile operation command center, supporting the efficient deployment of mobile units.

Another benefit of Hiperwall for LA Metro is the ability to view social media activity on the video wall. “Monitoring social media activity on Hiperwall is a key benefit to LA Metro because we are able to gather intelligence for geolocation of the tweets and other communications,  and view the information against reports in that particular location to determine if a law enforcement response is needed in that area,” said Quach. “In some cases, social media helps us diffuse incorrect information.”

During times of non-emergencies and when minor incidents are not occurring, the video wall can be used for other purposes, including training and debriefings. Hiperwall is used to support annual training and testing for LA Metro staff, law enforcement officers, and bus supervisors. Training materials such as videos, online resources and PowerPoint presentations are displayed on the Hiperwall system. After incidents occur, information is displayed on Hiperwall as part of the debriefing process.

In 2012, LA Metro decided to create an emergency operations center (EOC) with a video wall as a central component to improve visual situational awareness and resolve inefficiencies in bus andrail video monitoring

Prior to the Hiperwall video wall system, LA Metro used two closed circuit TV video systems—one for rail operations and one for bus operations. Each operations group could not see the video feed of the other and were only able to relay information about the visuals they were seeing to others by phone. In addition, each of the two groups only had a single 42” display, which provided limited visual information and often resulted in the need for several investigators to visit an incident. In 2012, LA Metro decided to establish a formal EOC and purchased a Hiperwall video wall system as one of the main components.

“We wanted the ability to service the equipment and software ourselves,” said Tinh Quach, Chief Administration Analyst for LA Metro.

LA Metro wanted to be able to easily manage the video feeds shown on the video wall.

“As we began sorting through all the requirements in developing a solution, we realized that we needed to see numerous video feeds from surveillance cameras at once and have the ability to resize and reposition those views for greater visibility into an incident,” said Quach. “Hiperwall could do that and more.”

Hiperwall provides ultra-high resolution video walls that support the display of multiple sources of information at once, including numerous video feeds, social media activity, news feeds, multiple HD-videos, maps and any standard or customized applications that can be displayed on a regular PC, among other sources.

LA Metro installed a Hiperwall video wall system consisting of a 6 x 2 configuration of 55” LCD monitors, three 55” LCD monitors (located in the same room as the main wall on the sixth floor but physically separated), and a 3 x 2 configuration of 55” LCD monitors as a second video wall, located on the 26th floor, for executive briefings. Visual information and content for all the video walls and monitors in the system are handled with one control station, and only the most important information is sent—instantly—to the wall in the executive briefing room to share key intelligence with top LA Metro executives. On the sixth floor, LA Metro staff choose which visual intelligence is important for LA Metro executives to see,and then they share only that content on a second wall in the executive briefing room, located on the 26th floor. 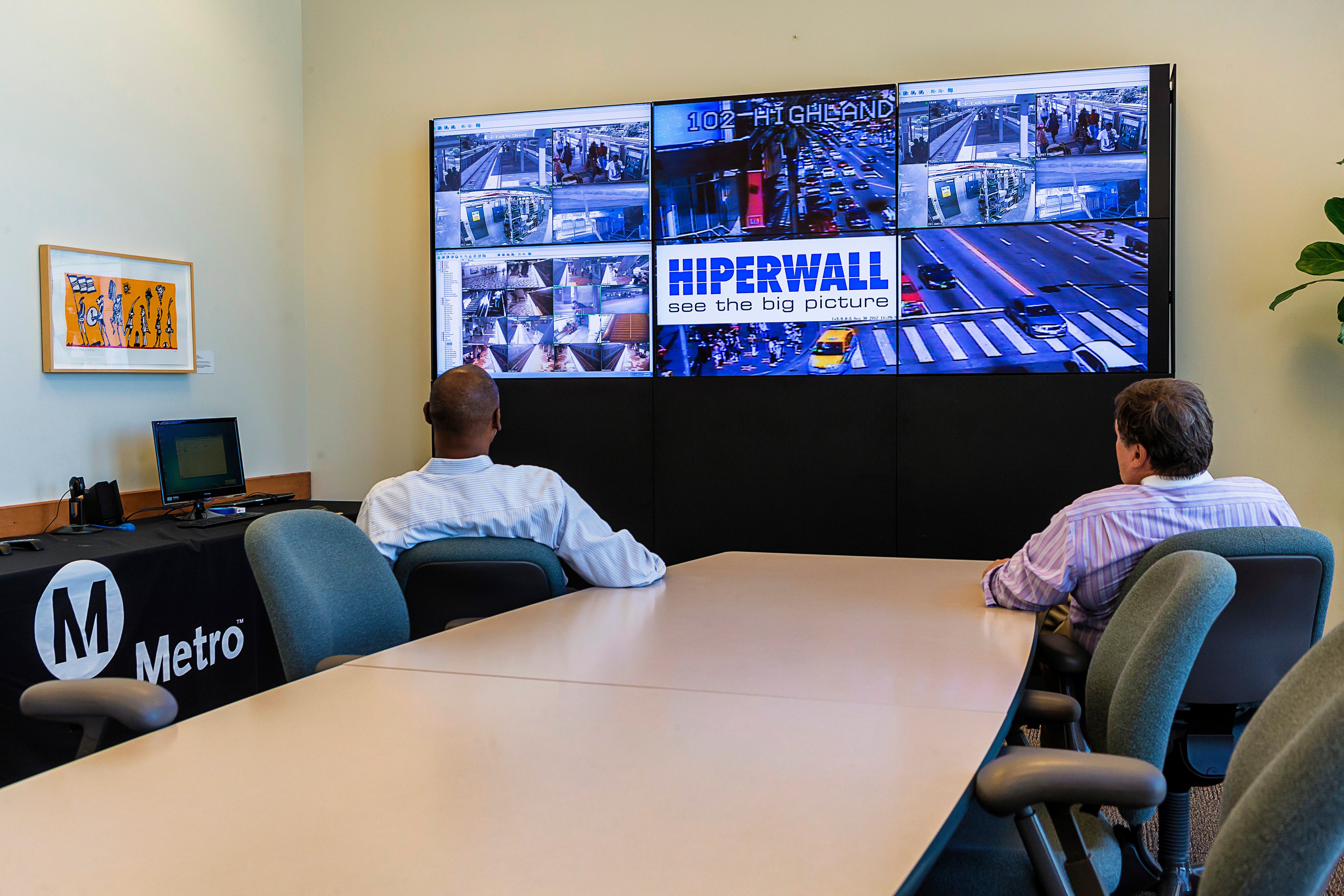