I wrote a blog post about how the AV industry is transforming into an information technology (IT) industry. In the article, I equated the old video feed-based AV industry to network circuit switching, while I compared IT-based video technology to packet switching, the typical network infrastructure in use now. It is very common in today’s AV industry to see nearly everything being done over networks rather than video cables, so the industry has made a partial transition to IT. Some in the industry, however, are still doing the same old things with networks that were done with video cables – they’re switching video streams between input and output devices. This is a step towards becoming truly IT-centric, but it is not the endpoint. Sure, they’re moving data, but they’re not taking advantage of the ability to process that data the way a true distributed visualization system can do.

Now what does it mean to “process the data?” Processing the video data is very different from decoding a stream. Certainly, video streams must be decoded to play them, but in the IT-centric systems I’m talking about, that decoded stream is just data that can be processed and manipulated. Therefore, it can be filtered, modified, rotated, positioned, and sized as needed. It means monitor boundaries are not content boundaries. Content can be scaled from many items showing on a single Direct-View LED mesh or projector to large content items covering all or parts of many displays in a LED video wall, as shown in the following pictures.

These pictures show content overlapping, crossing monitor boundaries, and sharing space with other content on a single monitor. This can be done because the content is just data that can be processed and displayed, no matter whether it is an image, a video stream, a movie, or a data stream. Even compound content, like slideshows that contain other content items, can be manipulated, just like a simple video or a 2 billion-pixel image.

Lots of video wall systems can show one content item per display or group of displays, but far fewer can show multiple items per display, especially if some of those items cross monitor boundaries. Showing multiple items is a hard thing, even for solutions claiming to be IT, because they tend to just direct a video stream at each player computer driving a display. It is easy for Hiperwall, however, because we treat everything as data on a nearly endless pixel canvas that can show an enormous amount of content in detail. We can show hundreds of simultaneous sources across hundreds of displays of nearly any type and in nearly any configuration. We can do this because we are a true distributed system and don’t use a centralized server to process all the feeds. We let the computers driving the displays do the work of decoding, processing, and drawing content items they need, so there is no content bottleneck as there is in so many server-based systems.

One of our competitors recently put up a comparison chart trying to show how they compare to Hiperwall. Many of the claimed limits for Hiperwall are demonstrably and laughably untrue, but their feature claim I was most amused by is Picture-in-Picture. They claim we don’t have it, while they, of course, do. Well, since you’ve read this article, you know we don’t need to call out a Picture-in-Picture feature, because we can put any content wherever and whenever, so we can trivially put one content item in front of another one, and we can add transparency, so it is even better than traditional Picture-in-Picture. But just to prove the point when they read this, here is a video of a live video stream moving in front of another video stream in front of a huge live data feed of air traffic in the Los Angeles area. The moving video stream even becomes somewhat transparent as it moves in front of the other video stream. Sure, some of our customers don’t need to do all those things at once, but if they need to they can. 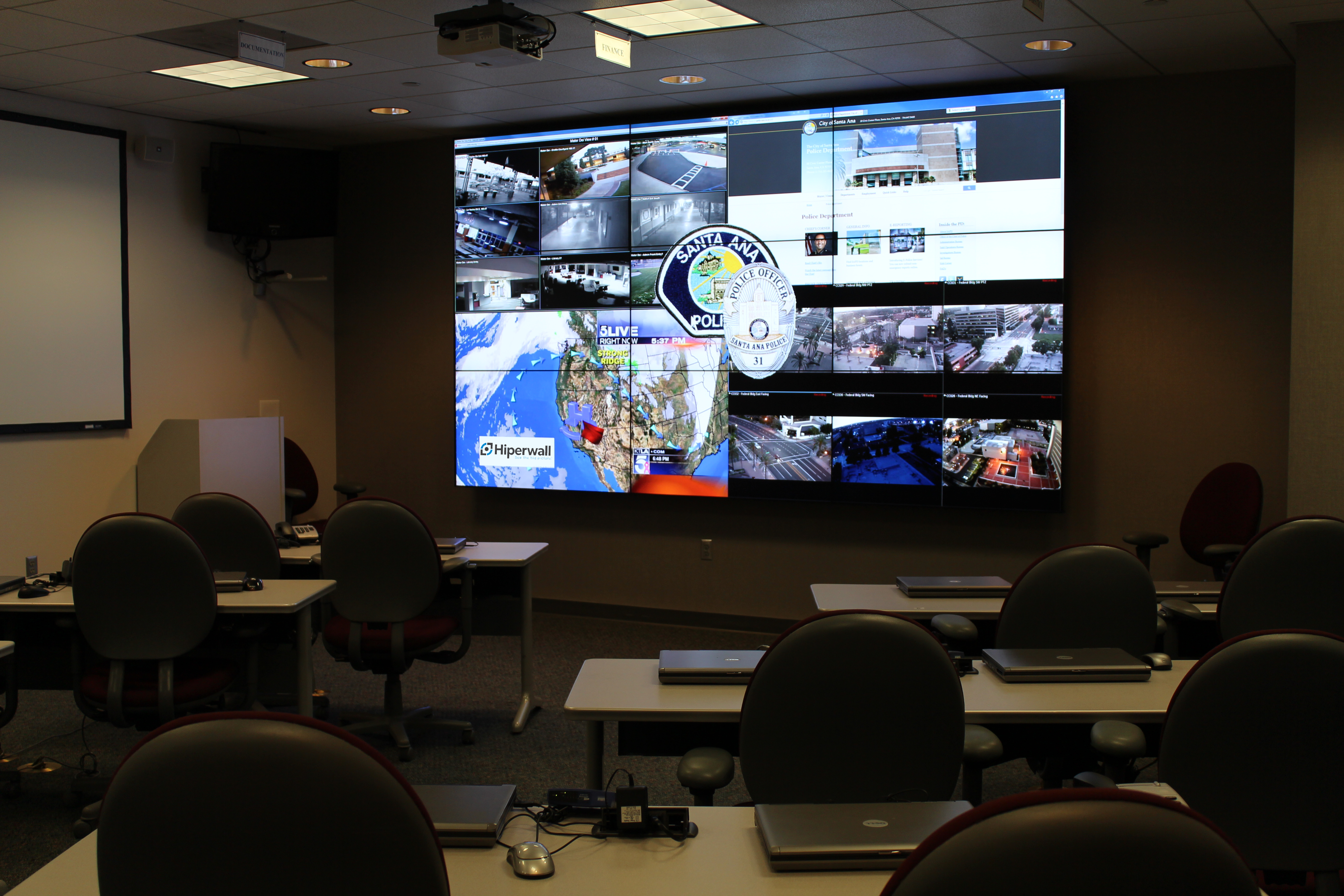 The SAPD Emergency Operations Center morphed from two main workstations in separate offices displaying surveillance system cameras on four large screens primarily designed to monitor the perimeter of the Police Administration Building to a Hiperwall-driven command center with nine 55-inch NEC, thin bezel, commercial-grade displays. The SAPD did not have a “true” video wall or visualization system in place prior to installing a Hiperwall-driven system which includes IP cameras, an enterprise-class network management system and a new fiber-optic backbone.

Knowing they needed a level of preparedness for potential disasters, the SAPD began reviewing LED video wall solutions for a command center. The SAPD ultimately chose Hiperwall because it was designed specifically for large display surfaces – it was a true visualization system. But more importantly, it gave the SAPD the centralized capability for displaying infinite data sources that could be viewed and managed effectively and easily. The Hiperwall visualization solution allows the Emergency Operations Center to receive any number of feeds from the 300-plus city-wide cameras, display the SAPD CAD system, National Weather Service satellite imagery, several social media channels, helicopter downlink video, SAPD video cameras, local news and much more.

During the winter storm, the SAPD Emergency Operations Center powered by Hiperwall became the command and control room for the city’s agencies to monitor the city-wide cameras, satellite weather changes in real-time, city maps from Google Earth to view flood damage, traffic accidents, 911 calls, fire/EMS, and public works. All three city departments were in the Emergency Operations Center using the Hiperwall visualization system to collaborate which allowed them to be more efficient in resource management, triage calls and managing response times during the storm.

After discovering Hiperwall with all its capabilities, the SAPD stopped evaluating other video wall systems. Not only was Hiperwall an advanced visualization solution, it provided the SAPD the latest in technology and best practices for their Emergency Operations Center. It gave them a cost-effective solution that will grow with them. The Hiperwall software-centric solution requires only ordinary PCs, monitors, and a standard Ethernet network making Hiperwall a more affordable visualization system than traditional video wall technology. It’s ease of operation also expedited the training process, which effectively reduced manpower and operational costs.

Having a single location to gather and share information with those in the field and make risk mitigating decisions keeps the Santa Ana community safe. The incident will always dictate the necessary feeds and data requirements, but the SAPD is now prepared with their Hiperwall-driven Emergency Operations Center to manage or co-manage any situation.